Enter the era of inventory resets, initiated by the EU’s Registration, Evaluation, Authorization and Restriction of Chemicals, better known as REACH, which seeks to modernize the legal instruments for developing modern and precise chemical control regulations. The first step, pervasive to all resets, has been to survey the industry to identify substances active in commerce today. As such, the U.S. Environmental Protection Agency asked the industry to report chemicals manufactured or imported between June 21, 2006, and Feb. 7, 2018. The reporting date has passed, but this step was just the first domino to fall.

The World Before Reset

National inventories have been mostly operating under the same basic principles: Substances listed on an inventory such as the United States’ Toxic Substances Control Act (TSCA), Canada’s Domestic Substances List (DSL), South Korea’s Korea Existing Chemicals Inventory (KECI), Japan’s Existing and New Chemical Substances (ENCS), the New Zealand Inventory of Chemicals (NZIoC) and so on are considered “existing in commerce.” When a substance is not in an inventory, this generally triggers requirements to notify authorities for manufacturing or importing.

Section 8 (b) of the Toxic Substances Control Act, for instance, commonly referred to as the “TSCA inventory,” was created some 36 years ago. And since that time, the number of chemicals in commerce has increased dramatically. In 1982, the list consisted of about 62,000 substances, but today the list has grown to 86,498 entries—an increase of about 40 percent. Since it has never been cleaned up, imagine the dust, lint and tumbleweed lurking in there!

In our jargon, we refer to these substance lists as “positive,” as product stewards are happy when a substance is listed or all components of a mixture are listed under a country-specific inventory.

“Exemptions” is also a pervasive notion of all national inventories. Examples include: For small quantities, for research and development, test marketing or naturally occurring substances to name a few. You probably guessed, inventories and defined exemptions vary and are not globally harmonized, which does not surprise product stewards.

However, for the sake of standardization, Sphera has harmonized the outputs on Safety Data Sheets (SDS), which expresses an overall conclusion of the compliance of a given mixture to a country-specific inventory.

The statuses are carefully designed so that product stewards are explicitly informed of data gaps. Indeed, the lack of information is information, and knowing what you don’t know is a call for action to investigate: Do I have the right Chemical Abstracts Services (CAS) number? Could this be listed under an alternate CAS number? Is this a new substance? And so on. If following an investigation this substance is not registered, then a substance notification/registration process must be initiated.

As we mentioned earlier, chemicals reported by the industry will be listed as “active” in the future TSCA inventory, which will further guide the U.S. Environmental Protection Agency’s rulemaking. At the time of this writing, the inventory consists of 38,338 active substances. The remainder have a “blank” status but will be explicitly listed as “active” or “inactive” in future inventory update.

From this point on, a company wanting to manufacture or import a material designated as “inactive” must notify the EPA before proceeding.

As such, although there’s a single inventory list, there is a need to precisely differentiate “Listed and Active” from “Listed and Inactive” substances individually and in mixtures. Ignoring this nuance on an SDS will only trigger doubts and questions throughout the supply chain.

Sphera, with the support of an engaged customer community, is ready to issue a working solution in early 2019 that combines data, data entry refinement and data migration to ensure a smooth transition, reviewed sentence outputs and reports for our customers.

Even small and simple regulatory changes can ripple through business requirements, which call for a sophisticated work process change or software solution update—and a chance to hit that “reset” button. 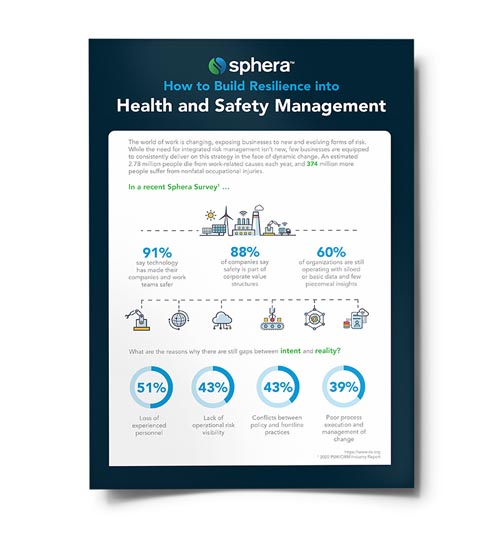 How to Build Resilience into Health & Safety Management
While the need for integrated risk management isn’t new, few businesses are equipped to deliver on this strategy.
Blog Post
Glossary Keeping the ‘Black Swan’ at Bay: Digitalization and Safe Operations
This e-book takes a retrospective review of a significant refinery loss event and the key lessons learned from it.
Blog Post
Read

2020 Survey on the State of Process Safety & Operational Risk Management
In this five-year milestone report, Sphera worked with 192 industry leaders to benchmark progress, and understand best practices.
Blog Post
The Best of Spark Delivered to Your Inbox