With the 2019-20 flu season upon us, there’s already a whole lotta coughing and sneezing already going on.

It’s difficult to go out these days without running into someone who seems a bit under the weather.

The 2018-19 flu season was a deadly one in the United States. According to the U.S. Centers for Disease Control and Prevention between 36,000 and 61,000 people died from the flu and as many as 42 million people became ill from it leading to 20 million medical visits. While the CDC recommended that people get their annual flu shot by the end of October, it’s still not too late to get a flu shot.

The flu viruses currently making their way across most of the United States in particular could have serious implications for your workers—not to mention the well-being of the organization as well. While sickness isn’t the first thing that comes to mind when one considers Operational Risk, the truth is that if many people will miss work this flu season because they are sick. That could significantly affect production, which is a huge risk in and of itself.

A couple of years ago, Chicago-based executive coaching company Challenger, Gray & Christmas estimated the flu season could cost businesses $15.4 billion in lost productivity because the firm estimated that 18 million workers missed an estimated four eight-hour shifts because of the flu in the United States.

That number is based on average wages. It doesn’t account for not being able to meet daily production standards, especially for manufacturers or companies operating as part of the supply chain.

A 2016 report titled “The Workplace and Health,” written by NPR, the Robert Wood Johnson Foundation and Harvard University, found that 65% of adults working in what they self-reported as “low-paying jobs” said they go to work sick “always” or “most of the time” when they have the flu. Compare that with the 55 percent of workers who say they keep coming to work when they’re sick while performing “average-paying jobs” and the 48 percent for people who identify as having “high-paying jobs” who can still be found at work even when a malaise sets in. Additionally, “Half of restaurant workers and more than half of workers in medical jobs say they still go to work always or most of the time when they have a cold or the flu,” according to the report.

Sick on the Job

Unfortunately, working through illness has become a contagious mindset for many people in today’s workforce. The reasons are various: Some fear potential repercussions from managers or senior staff members, some fear missing deadlines or falling behind, some fear lost wages or “wasting” their sick time, and some just don’t fear being sick enough: “I’m fine; I’ll work through it.” Cough, cough.

The more people who show up to work sick, the more the flu is likely to spread. This year’s flu season is already troubling as there are reports of shortages of flu shots for senior citizens, who are considered higher risk of serious complications from the flu.

Researchers in Australia are working on a “broadly protective influenza vaccine that does not require annual reformulation,” but until that comes to fruition, an annual flu shot along with proper handwashing and sanitizing is still the best defense against catching the flu.

The CDC estimated that flu shots were 29% effective against the Type A and B flu strains last season, but only 9% effective against H3N2 last flu season. Even so, we still recommend getting a flu shot. As the New York Times reported, “The negatives of a flu shot are almost nonexistent, and significant side effects are very rare.”

In the 2018 flu season, two schools closed for a week or the better part of a week in Illinois, where Sphera is based, because too many students were sick with the flu. Schools also had to close for long stretches in states such as New Jersey, New York, Tennessee and Texas to give scores of students—and staff members—a chance to recuperate at home and give cleaning crews a chance to disinfect the facilities. Now consider what would happen if those schools were traditional businesses instead. Imagine the Operational Risk.

While we couldn’t find an example outside academia of a workplace closing because of the flu, even if traditional businesses aren’t closing their doors to deal with the influenza, there’s no question organizations will feel the ill-effects as workers become ill.

Keep in mind that there’s no federal sick-leave law on the books in the United States, but some states and cities/counties do have laws that require companies to pay workers when they’re home sick. The Society for Human Resource Management has a list of those locations. 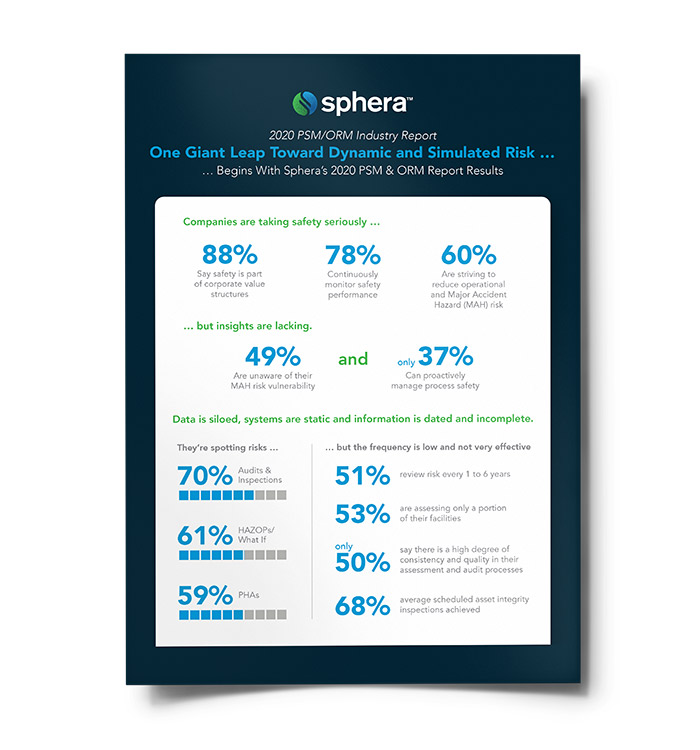 Continuously Improve Your Safety Culture
The challenges we faced in 2020 have reshaped the way we think about the safety of our employees, assets and…
Blog Post
Read Taking Total Control: 4 Reasons Your Business Needs Comprehensive Product Stewardship
Businesses in the chemical industry can’t sleep on product stewardship. They need insight into every aspect of a product’s lifecycle.
Blog Post
The Best of Spark Delivered to Your Inbox