Sphera Sustainability Day 2018: A Maintainable Methodology and Much More

This year’s Sphera Sustainability Day puts the spotlight on the importance of efforts to ensure the Earth continues to be the perfect place to work and live. The places Spherions visited are helping to create a sustainable world for generations to come.

Around the time the Civil War was ending, a new way to travel in style was beginning with the introduction of the Pullman car, which allowed people to relax and feel refreshed while they traversed the country by train. Named after George Pullman, a 19th century American engineer and industrialist, the Pullman cars changed the game for long-distance locomotive travel.

Today, the historic Pullman area on the South Side of Chicago, where the Pullman Palace Car Co. was founded in the 1880s and many luxury sleeper cars were built, is a national monument. And while Pullman had his methods for innovating luxury, today a new “method” has emerged—this time in the area of sustainability at the method soap factory.

On Aug. 22, 2018, Spherions from our Chicago office ventured to the method factory for our annual Sphera Sustainability Day to learn more about how method gives back to the neighborhood and the environment.

Interestingly enough, one of the reasons that method chose Chicago as the home of its LEED Platinum production facility is the location’s easy access to the railroads, said Austin Simpson, method’s Environmental Health & Safety manager, who gave Sphera a tour of the building. According to the Illinois Department of Transportation, 40 railroads wind their way through Illinois, and 1,300 freight, passenger and commuter trains pass through the Chicago area every day.

The other big reason that method came to Chicago, Simpson said, was to make a positive impact on the community by hiring locally and by building an energy-efficient facility at a Brownfield site. It’s an area where steel fabrication once took place and where metal contamination was present in the soil before the factory was built. After having remediated the top 3 feet of soil—a process that may include “isolation, immobilization, toxicity reduction, physical separation and extraction” of soil, according to an article on the topic from the Engineering Geology journal, the factory is now surrounded by native prairie grass and evasive plant species are removed.

And as you might have guessed based on its Leadership in Energy and Environmental Design designation, the method plant—which opened in 2014 and which at the time was touted as the first new South Side factory in nearly 30 years—is laser-focused on sustainability efforts. 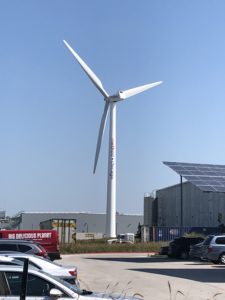 As you pull up to the factory in the heart of Pullman, the first thing you notice besides the tall grass is the giant wind turbine, a 230-foot structure that generates half of the company’s annual energy consumption. Your attention then refocuses on the giant solar tracking “trees” in the parking lot that are designed to follow the sun while generating maximum energy. It’s all symbolic of the sustainable efforts inside and outside the building.

Inside the massive 150,000-square-foot facility, your focus immediately goes to the right. There, a wall of brightly colored lights draws you in. Hey, the interior designers have their methods, too. At closer inspection, the lights aren’t colored at all. In fact, the lights are hidden behind soap-filled containers and produce a beautifully lit piece of artwork with reds, blues, yellows, purples and more. Method’s commitment to sustainability can be seen in every aspect of the facility. The building’s floors are made of recycled concrete, Simpson explained, and the plastic used to make the soap containers is made from 100 percent post-consumer recycled plastic that comes from resin pellets. A lot of design work went into the bottles, he said, in the hope that they will be reused rather than recycled or tossed.

And with so much attention on the creation of the bottles, it’s not a surprise that, as a B Corporation, even more attention went into creating products so they are biodegradable, naturally derived and nontoxic.

As we continued our tour, we also learned that there is a 75,000-square-foot greenhouse on top of the building designed and operated by Gotham Greens, a New York-based urban farming company.

Sustainability is clearly important at method. By having one distribution center for manufacturing and bottling, the company is also able to limit its carbon footprint. Looking at the factory floor from above, it’s hard not to notice the rows and rows of boxes of soap in the background as well as the plethora of products circling their way through the plant. There’s even a robotic case packer in the building to pack it all up.

As we packed up from our tour, we left with a strong impression about how well companies can do when they clean up their sustainability efforts. In Pullman especially, that effort appears to be on the right track. In Bangalore, India, Sphera colleagues contributed to the sustainability of the Angels Orphanage by cleaning and painting its surroundings. But there’s no reason not to have some fun as well. Spherions organized games for the kids, sponsored a lunch and contributed toys, gifts and clothes to the overjoyed youngsters on hand. Denver had an amazing Sustainability Day at The Action Center. Spherions sorted donations, made small dog food bags for homeless people with animals, and then unloaded and organized pallet after pallet of donated food for their food pantry.  It was hard work, but incredibility rewarding.  Nothing was wasted, food that was unusable went to composting while reusable containers were washed and cardboard was recycled. It was a sustainable success! Food plays a major role in any sustainability effort. That’s why Houston Spherions participated by working with other volunteer groups to pack meals for senior citizens. In all, the group packed 900 boxes of meals to feed senior citizens in the community. The 20 pallets they packed totaled 25,000 pounds of food.

The Houston Food Bank is the largest food bank in the country and feeds 800,000 people every year. It also provides supplies for disaster response and played a huge role in helping people during Hurricane Harvey one year ago. At that time, the food bank doubled its output of supplies in the months following the storm and still supports those people who are still in need today. For Sphera’s Sustainability Day this year, the Montreal office put on their work gloves and steel-toed shoes and got to work at Moisson Montreal, a not-for-profit organization that has been collecting and distributing food donations free of charge to the community since 1984.

The warehouse is strategically divided depending on function. It’s safe to say that our team was relieved not to be working in the freezer, but Spherions were able to prepare and pack boxes of donated, edible foods to be distributed throughout the city. In all, the colleagues packed nine pallets, or 270 boxes, of food.

For Sphera Sustainability Day, colleagues visited the Dublin San Ramon Services District wastewater treatment facility. The average U.S. family alone wastes more than 9,000 gallons of water per year, according to the U.S. Environmental Protection Agency. In a 2014 report, 40 state water managers said they expect a water shortage by 2024, so it’s critical that people and companies do their part to ensure the sustainability of this natural resource. Spherions learned a lot during their tour of the facility.