Things to Do in San Antonio Before, During and After Inspire 2019

Ready to explore San Antonio? Great! Saddle up; we’re talking Texas while hopefully blazing a happy trail of scintillating conversation along the way … 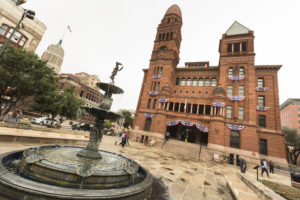 The five frontier missions that were formed at the time are now designated as UNESCO World Heritage sites, and a marker in front of San Antonio’s Bexar County Courthouse, shown above, recognizes that first government set up by those Canary Islanders in the early 18th century.

Today, San Antonio is the seventh-largest city in the United States with an estimated population of 1.5 million, and, with a median age of 33.1 years for its residents, it’s no surprise that this city in the heart of Texas is both vibrant and a whole lot of fun. That’s why it’s the perfect place for Sphera to host inspire San Antonio, which takes place May 6-9, 2019. As a bonus, the average high temperature in San Antonio is 85 degrees in May with a low of about 65 degrees, so the weather will likely be fantastic.

While those two pre-conference events don’t fall on the exact same day like they did in 2018, that shouldn’t damper the party atmosphere in May 2019. If you’re looking to experience the Kentucky Derby while in San Antonio—and maybe place a legal wager or two as well—you might want to visit the Retama Park race track, which is about a 30-minute ride from the Hyatt Regency Hill Country Resort & Spa where inspire San Antonio will take place.

During the 2018 Derby, a woman turned an $18 bet into a $1.2 million payout at that San Antonio race track by correctly picking the finishing order of the first five horses to cross the finish line. We can’t guarantee the same outcome for the 2019 race, but perhaps we can offer a suggestion that picking another strong mudder like Justify wouldn’t be an utterly bad idea if it’s raining on the track that day. If betting the “ponies” isn’t your thing and you prefer to ride one instead, then Westcreek Trail Rides is only about 4 miles from the hotel. A one-hour trail ride costs $40, but if you can get a group of six together, then the price drops to $30 for each rider. Giddyup! As we mentioned, San Antonio is also a good place to be to celebrate the anniversary of a key date in Mexican history. We suggest circling Market Square on your to-do list if you’ll be in town for Cinco de Mayo. Listed as the “largest Mexican marketplace north of Rio Grande,” Market Square helped celebrate San Antonio’s tricentennial in 2018 with a big celebration that included various types of music from blues to country to Tejano as well as a plethora of food, drink and shopping options. We expect a similar fun-filled fiesta next year as well.

We’re going to go out on a limb here and say margaritas might be a popular choice on May 5, so for those about to salt, we salute you. You might want to pay a visit to Margaritaville; the Jimmy Buffett chain has several margaritas on the menu from the Who’s to Blame to the Last Mango in Paris. Pro tip: There’s even a “$5 off your purchase of $25 or more” coupon you can use through the end of May 2019 in the official San Antonio visitor’s guide. Tell ’em p. 11 sent you.

However, if restaurant chains aren’t your scene or if you’d prefer to find your lost shaker of salt elsewhere, La Fogata Mexican Cuisine is highly rated on TripAdvisor. Talk about flower power—their drinks even come spruced up with an orchid. One real estate website listed La Fogata as the best place to get a margarita in San Antonio, but take that with a grain of salt (or a whole rim’s worth) if you prefer.

Of course, if you’re headed to San Antonio, you don’t want to miss a chance to glance at a menu filled with Tex-Mex food choices—basically Mexican cuisine with a European influence including ingredients with wheat flour and yellow cheese. According to the Texas Hill Country website: “Though Tex-Mex was the food of the Tejanos for decades, San Antonio was where this cuisine came to the masses. In the 1880s, rail lines brought more people into San Antonio, and the town’s chili queens kept them fed. Not only did they help to spread chili to the rest of the United States, [but] they also helped to popularize other Tejano home cooking meals that almost 80 years later came to be known as Tex-Mex.” And fans of the late Tejano singer Selena Quintanilla-Perez, who Jennifer Lopez portrayed in the 1997 film “Selena,” can find lots of memorable Selena places to visit in San Antonio. Those include walking over the “Selena Bridge” on the River Walk where Selena and her husband spent a romantic night and paying a visit to the bright umbrellas along the water where part of the video for her song “No Me Queda Mas” was filmed. We’d like to float an idea now: How about taking a narrated cruise on the river for only $12? They leave about every 15 minutes, and the cruise lasts about 35 minutes. Serenity now for sure! Keep an eye out for the sunfish artwork (pictured at the top of this blog) from New York-based artist Donald Lipski that have hung under the I-35 Overpass near Camden Street since 2009. Phase 1.1 of the project is now complete with Phase 1.2 of the four-phase project scheduled to be completed in 2020. It’s definitely something to explore!

Speaking of exploring, you won’t want to miss underwater explorer Robert Ballard’s keynote address at inspire San Antonio where, among other things, he will be taking a deep dive on taking—and mitigating—risks when making new discoveries. Ballard is credited with finding many long-lost ships, but he has one titanic discovery on his résumé. In 1985, Ballard, now a professor of oceanography at the University of Rhode Island, and his team found the long-lost RMS Titanic wreckage 2½ miles below the ocean’s surface. Thanks to Ballard and his team, a lot has been learned about that tragic day in 1912, but we’re sure Ballard has more than a few tales to tell that might surprise you.

Of course, what would inspire be without training opportunities? Sphera has a record 20 sessions planned for San Antonio from SpheraCloud analytics to calculating analysis and “what if” scenarios in opsInfo and many others!

There will be so much more in store for you to explore at inspire, so keep checking our website for more exciting announcements.